Even after one season it seems strange to think about Andrew Benintendi as a Kansas City Royal, but here we are.

In NFBC 15-team drafts, Benintendi is currently coming off the board around pick 203 (13th – 14th round). Or the 7th Royal, not that it matters in our fantasy baseball game. But, it somehow takes some shine off the outfielder in my eyes (not really, but I was still a bit surprised by that nugget of info). Trivia time: name the six Royals going ahead of him. Rest of this post will wait…

Benintendi’s brief 2020 season was something to forget, which fantasy baseball drafters failed to do last draft season as they drafted him in the 16th/17th round. That’s quite the discount from 2019, but early 2022 drafts seemed to have corrected.

Benintendi looked very much like the same player in 2021 as in 2019, but seems to have dropped off from his early career production. The one concerning trend from 2019 to 2021 is plate discipline (lower walk rate, higher strikeout rate, higher chase rate). Still, 2019/2021 Benintendi is a solid player in both real-life and fantasy. Steamer projections currently have him down for a 17 HR / 12 SB season with a solid .263 batting average. That’s the markings of a player who will not win you a league but will keep things steady as a 3rd-5th outfielder. 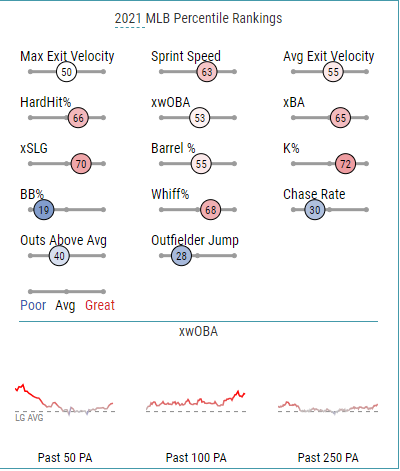 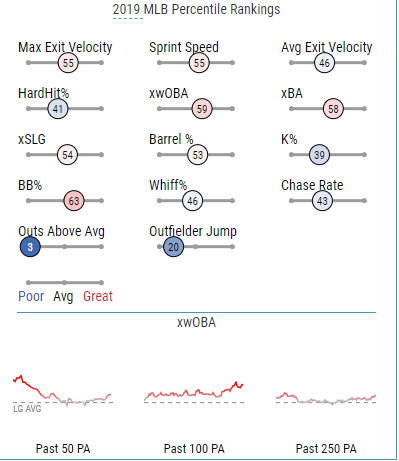 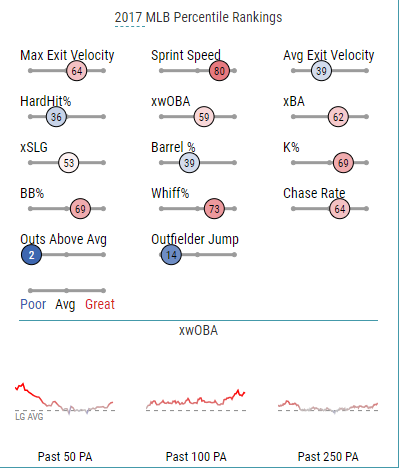 Benintendi had been consistently healthy until the 2020 season when he strained a rib cage muscle, which cost him around seven weeks. He then had a similar injury last year which cost him three weeks. It’s also possible some of his poor mid-season production could be attributed to the injury.

I’m not sure if rib injuries become chronic, and as such, should pencil Benintendi in for 3-6 weeks of lost time each season. However, I am personally adjusting my expectations to be closer to 550 plate appearances than 600-625.

Benintendi’s draft value stems from his contributions across the board. He doesn’t excel at anything, but contributes to each stat. This makes his stolen base performance in 2021 problematic. Steamer (and other) projections are assuming he will hit the 10+ threshold for stolen bases.

Last season, though, he did not reach that mark. His Speed scores seem fine. Two things stand out:

Looking into the second item, here is the trend across months:

I’m using Steamer projections (as of ~November 24th) to create the comparisons. These are all players with between 13-21 home runs and between 10-19 stolen bases.

Several questions pop out here and give some direction for future player analysis: why is Trent Grisham going so high, should Benintendi be drafted higher than Grossman who needs 600+ plate appearances, is Pham worth picking this year, how about Nimmo?

One clear thing stands out: Benintendi’s batting average helps set him apart from the 15/15 range players.