Freddie Freeman, World Series Champion…going to savor that one for a moment.

Ok, so we still don’t know where Freeman will be a Brave for life (or close to). For some reason the Braves front office seems unwilling to give a thirty-something first baseman a six-year contract. Being fiscally responsible is not dead.

But re-draft fantasy baseball players don’t care about six-year contracts. We care about next year’s performance, which should be good enough to warrant whatever contract Freeman ultimately signs.

The real question is whether Freddie Freeman is worth a first-round pick this year. Ok, he’s not. Unless you’re bypassing pitching entirely. And even then I’m not convinced he’s among the top 15 hitters that should be coming off the draft board.

So, what should we do with Freddie Braves?

There’s not really much to look at here. Freeman consistently has red everywhere. Take his 2021 for example (which admittedly is even better in most categories than other years; especially that chase rate): 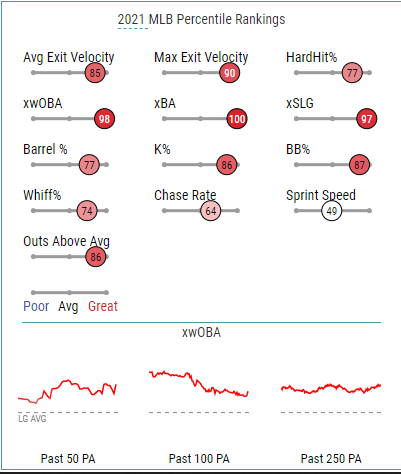 Everything in his 2021 profile seems to reflect his career norms. That is, he’s not showing signs of decline yet. Meaning: we could realistically expect similar production as we saw in 2021. Park/team construction factors aside since we don’t yet know where he will call home.

Steamer is the main public projection already available, and it looks favorably on the long-time Brave:

Baseball Forecaster has a similar projection, even slightly more generous on their HR forecast (though I expect both are within the same statistical margin).

Where to take Freeman?

This brings me to why I am writing about Freddie Freeman. Trying to figure out where he should go in drafts. He is currently being taken around the 20th pick (anywhere between 14th-25th): the 15th hitter off the board.

The problem is that the current iteration of my draft tool has Freeman as the 28th hitter off the board. Not only that, but it also has him as the 4th first baseman:

My first instinct is that I am underestimating the importance of batting average (i.e., I have a calculation error).

Update: I did have an error. Think I have it corrected now; or at least I feel better about the rankings. Freeman’s batting average + home run contribution now equals roughly the same as Alonso’s batting average + home run contribution. But I still have Alonso ahead of Freeman. At least Olson is now behind Freeman which feels much better to me. Freeman is now also the 23rd hitter in my rankings (without any positional adjustment).

Ultimately this means that I am completely out on Freeman unless I decide I am willing to sacrifice “value” for expected consistency. That is, I feel comfortable I am going to get close to what I expect out of Freeman. Cannot say that about some other players being taken in Freeman’s range. Still, I am committed to the idea that Alonso is being under-valued right now. Unfortunately, Steve Cohen’s shopping spree yesterday (Marte, Canha, Escobar) may send other Mets’ players up draft boards.

I am curious what other players have similar batting average and power contributions. This is difficult since Steamer currently projects only 11 hitters to have at least a .288 batting average (order based on my rankings without positional adjustment):

Adding a modest 20 home run filter yields only six players: Guerrero, Turner, Bichette, Freeman, Marte, and Seager. Looking at those players doesn’t offer much actionable advice. Other than questioning whether Seager’s shortstop eligibility is enough to warrant being taken two rounds before Marte and his dual eligibility.

This site uses Akismet to reduce spam. Learn how your comment data is processed.