Rhys Hoskins is someone I was higher on last year than the field, and seems like that is much the same this year as well. Hoskins is currently the 15th first baseman off the board (10th with only 1B-eligibility). These guys are pretty much all grouped together:

And that feels just about right. Except I am happy to have Hoskins here, and have him higher than everyone listed here, and even potentially higher than a few others (e.g., Jose Abreu) so I like the possible discount I can get by waiting until the 10th round to snag the Phillies 1B. Exact placement depends on how you see the batting average and power output.

Steamer projects Hoskins for a .236 batting average, whereas he’s listed at .255 in Baseball Forecaster. Quite the range!

Let’s see where he has been during his career: 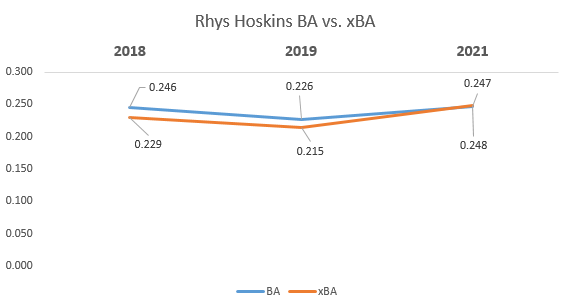 I omitted 2017 and 2020 due to number of plate appearances. Surface level look says that a .255 batting average projection is ambitious, but I am willing to believe in something closer to .245 (granted, we’re talking about something like 6-12 more hits in a single season). His rolling xBA chart gives some positive indicators (and even hints at that higher BA): 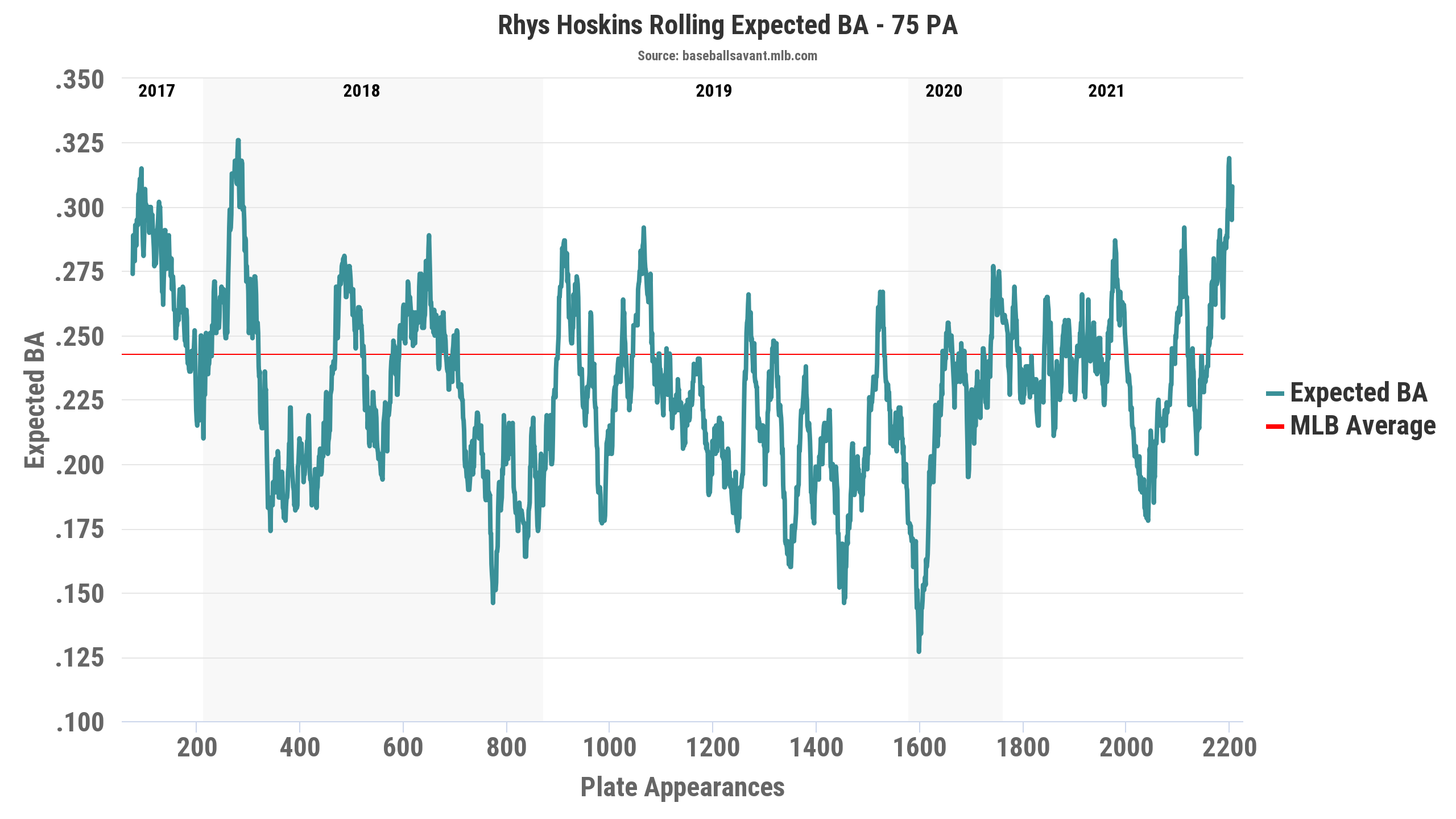 Hoskins’ approach also seems to have changed: he looks to be more aggressive. He had the lowest walk rate in his career in 2021 (10.6% vs. 13.7% career). His contact % also continued its 5-year decline:

Conversely, Hoskins’ has increased his Swing% in each season: steady increase from 38.4% (2017) –> 44.3% (2021). A more aggressive approach could translate well for fantasy baseball except for maybe those in OBP leagues.

Hoskins has had an injury in 3 out of the last 4 seasons. None seem related, so I would not be concerned about chronic issues. And the average days missed in those three seasons was around 22 days.

Where Hoskins ultimately falls in rankings will largely depend on where you place his expected plate appearances.

Based on historical data, penciling Hoskins for 575-600 PA seems fine for projections. It’s also possible that the DH in the National League could even add a few more plate appearances.

I’m bullish on Hoskins given his solid floor. If he gets around 625 plate appearances, then he should be great value at his current draft slot. Even at 585 PA, he is still solid. If you’re bearish on his PA or AVG, then you may prefer others in the same range.

This site uses Akismet to reduce spam. Learn how your comment data is processed.